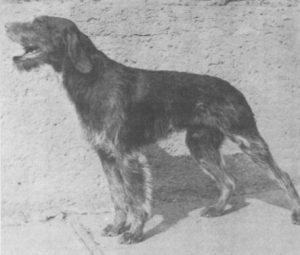 Erik od Jezárek was the first Český fousek imported to North America by the BWPGCA (then WPGCA). Erik was born 28 June 1981. In the Czech Republic he earned a Prize I in MFH (451) and Prize I MRK (477). He sired several excellent litters in North America and is represented in the pedigrees of about half of the puppies recently imported from the Czech Republic. Erik’s offspring were well known for their sweet temperaments. He lived to the ripe old age of 18 years 3 months.